A mosaic of nature, culture, tradition, history and modernity – the Sri Lankan palate is wide and filled with befitting choices. This tour is customized by Worldwide Adventures to bring together the two most glorious facets of Sri Lanka – culture and wildlife. What makes Sri Lanka one of the most popular destinations for Wildlife safaris is its vast array of untouched habitats. Often referred to as the pearl of Indian Ocean, the country has much to offer ranging from history to nature to religion!

Arrive at the Bandaranayaike International Airport. You will be greeted by our English-speaking chauffeur guide. You will be welcomed in typical Srilankan spirit and each of the clients will be garlanded by Orchid flowers. You will be escorted to the vehicle and thereafter, proceed direct to Negombo. 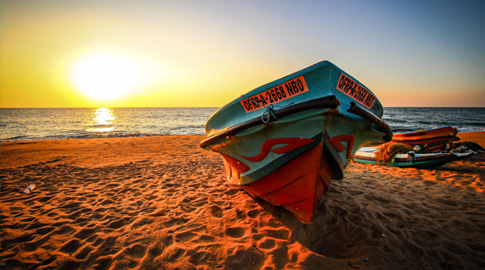 After breakfast we check out from our hotel and leave for Kandy. On arrival to Kandy, check into your hotel and spend the rest of the afternoon at leisure.

KANDY – a lovely exotic city, the Hill Capital and last stronghold of the Sinhala Kings is a UNESCO World Heritage Site, which retains an aura of grandeur, time has not affected. Encircled by hills, with a tranquil lake in its centre, it is the site of the renowned temple that enshrines the Tooth Relic of the Buddha and the Royal Botanical gardens – home to one of the world’s best collections of Orchids. A cultural sanctuary where many legends, traditions and folklore are still lovingly kept alive, Kandy and its satellite villages are the centre of the islands handicraft industry (items of wood, brass & silver) exquisite silver or gold jewellery and precious gems of many varieties including th e world’s best blue and star sa pphires. The highlight of the city’s calendar is the Esala Perahera, when a replica of the casket enclosing the Tooth is taken in procession for ten glittering nights in July/August by exotically costumed dancers, drummers and approximately 100 Elephants.

Dalada Maligawa or the Temple of the sacred Tooth Relic in Kandy is the most venerated place of worship for Buddhists throughout the world. Built in the 16th century, this temple houses the sacred Tooth Relic of the Buddha brought to Sri Lanka from the Kalinga province in ancient India in the 4th century AD. Several buildings have been added to the temple complex by successive rulers, the latest being the Golden Canopy over the inner shrine where the Tooth Relic is placed. Originally the Temple was within the King's palace complex as it was the symbol of Royal Authority.

Please note: The evening pooja – an experience of its own, is usually a very crowded event where locals visit the temple to participate and pay their respects. It is important to wear cloths covering yours shoulders and below knees. 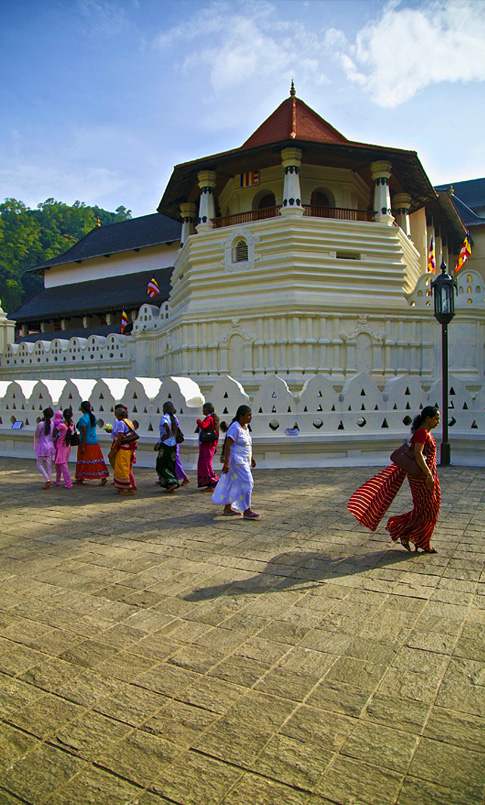 After breakfast, check out from the hotel around 9.30 Am & depart for Peradeniya Train station to board the train to Nuwara Eliya. (Nanu Oya)

We continue journey to the highlands of Sri Lanka. You will proceed to the quiet town of Nuwara Eliya by train, Your luggage will travel by car / Van. You will then be picked up from the Nanu-oya train station and transferred to the hotel

You will be picked up at the station and will be transferred to your hotel in Nuwara EliyaNuwara Eliya is a mountain station at 1,868 m (6,128 ft) of altitude, in a splendid landscape. The city pretends to be particularly well-kept and neat, and the always green grass gives to the locality an aspect of “colonial British style". Nuwara Eliya was built entirely during the 19th century and its architecture mimics that of an English country town, with red-brick walls, country house like hill club and mock-Tudor half-timbering. Blessed with salubrious climate, breathtaking views of valleys, meadows, mountains and greenery; it's hard to imagine that Nuwara Eliya is only 180 Km from the hot and humid Colombo. Temperatures are 14C-21C (Jan- April) 16C-18C (May-Aug) 15C- 18C (Sept-Dec).

We leave for sightseeing at the renowned hill station of Nuwara Eliya, a retreat for British Civil Servants from the heat of the plains. Also known as Little England, Nuwara Eliya is famous for its spectacularly beautiful approach, picturesque landscape and cool climate. Many of its buildings retain features from the colonial period along with a 117 year old championship golf course, one of the most scenic in the world, nestled between the town and surrounding forested hills.

Proceed to Kandapola and check into the hotel. 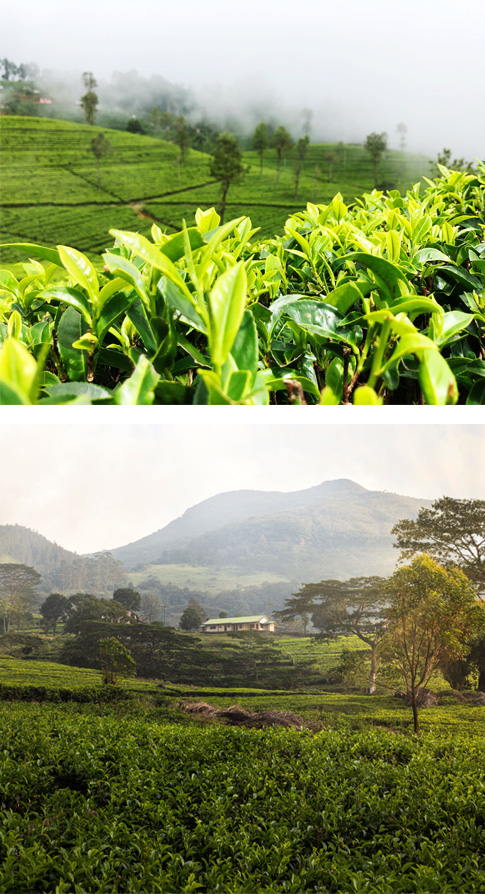 We leave early morning at 05.00 am for an excursion to Horton Plains.

Sri Lanka's highest plateau 7200 ft above sea level in the central mountain country. This ‘Fen” is a very scenic region with an astounding variety of scenery from mountains to grasslands, from marshes to trout streams. Sri Lanka's best flavored high grown teas are grown in the surrounding areas. Spectacular view from 'Worlds End' where the plateau plunges a thousand feet in a straight sheer drop.

Please note: If you are to do this excursion & get the maximum benefit, it will require you to depart the hotel by minimum 5 AM with packed breakfast. The plains gets covered with mist and visibility becomes very poor. This is the reason most visits are done by early.

Return to hotel visiting a Tea plantation and factory.

Rest of the day at leisure for sightseeing of Nuwara Eliya. After breakfast, approximately at 0930 hrs we check out from the hotel and leave for Yala

Yala - Sri Lanka’s most known National Park is popular for Elephant, Leopard, Bear, Crocodile and Wild Boar. 97,800 hectares in extent, this is the second largest of Sri Lanka’s National Parks. Its open undulating terrain made it famous for elephants for many years, but recently the park has also received much fame through publicity by National Geographic and the Discovery TV channels, which focused on a leopard research/conservation and identification project. Claims have subsequently been made that Yala National Park has the world’s highest concentration of leopard per square kilometre. Vegetation is primarily grassland and shrub jungle with patches of dense growth while several salt and fresh water lagoons are a haven for a large variety of resident and migrant birds. Areas popular with leopard are rock strewn hillocks with dense shrub in which the animals hide. Breakfast at the hotel
At approximately 1530hrs we embark on our 02nd safari to Yala National Park. 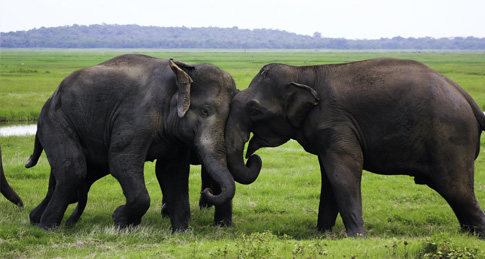 After breakfast we leave for Galle.

The ancient trading post of Galle, said to be the famous Tarshish of the Bible. Historically, this award winning World Heritage fortified township was an essential port of call for Chinese, Persian, Arab and Indian traders. Javanese and Sumatrans came later followed by Marco Polo in 1299 AD. The Portuguese arrived in the 1500’s and built a settlement with a fort of palm trees and mud. This was captured by the Dutch (and finally the British) who built the 400 year old fort with great ramparts and bastions to protect their presence. Narrow streets are lined with old houses displaying Dutch heritage, with their pillared verandahs. Government offices remain in use and the community within the fort is a bustle with daily life – a living breathing town, hidden within fortified walls of this ancient, maritime citadel.

We enjoy a walking tour of the Galle Fort.

Laughter, chatter, gossip and smiles abound within the rampart walls. After lunch, we explore the fort, overflowing with landmarks, strolling past the Dutch church, the governor’s house, the spice warehouses, court square, the Kacheri or Town Hall, the lighthouse and ramparts. Near the old Arab mosque are streets leading to cricket fields and the district Judge’s house, surrounded by ancient frangipani trees. 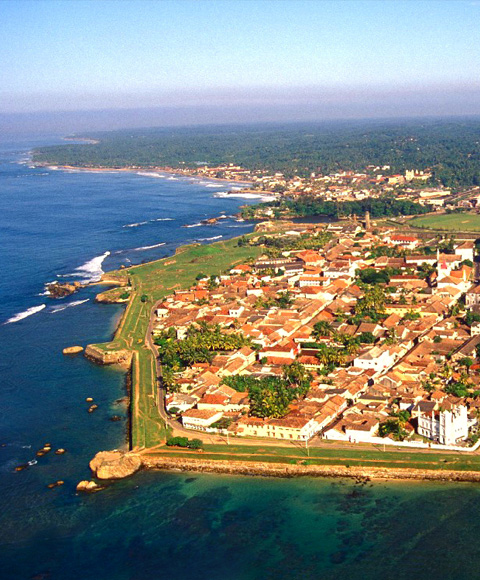 After breakfast we leave for Sinharaja 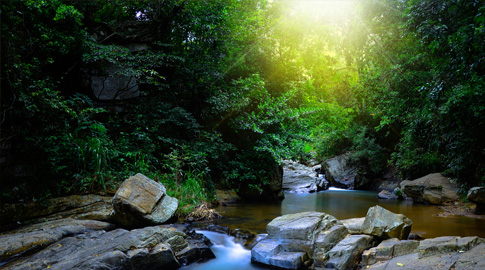 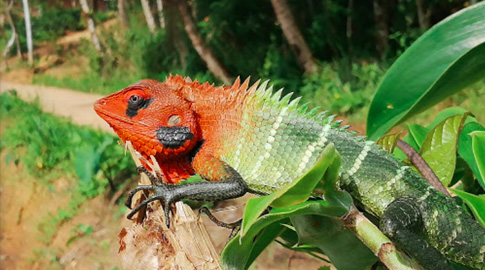 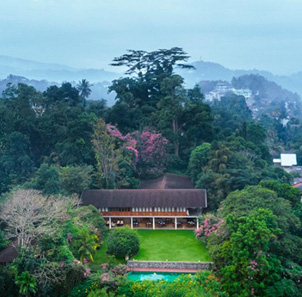 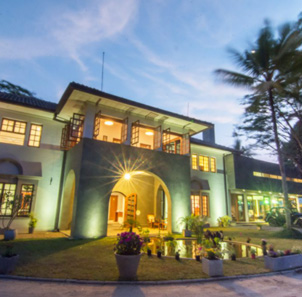 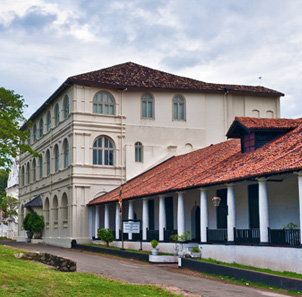