Festivals or tshechu are a major part of Bhutanese life and they offer a unique cultural insight into this tiny Himalayan kingdom.

Festivals here are a vibrant affair. Colourful costumes, music and masked dances, bring out the fervour of the festive occasion. From Thimpu tshechu one of the biggest festivals, Paro tshechu to Jambey Lhakhang Drub, all of them create a lively atmosphere and one can witness the history and tradition come alive on the mystical plains of Bhutan.

The Paro Tsechu is known far and wide for its sacredness. It is one of the most popular events for the Parops and a source of major attraction for both locals and foreigners alike. His Majesty the King graces the final day of the festival offering prayers before the Guru Thongdrel Chhenmo. The last day of the Tsechu as expected each year draws a record number of people both local and tourists in the wee hours of the morning, as the Thongdrel Chhenmo of Guru Rinpoche is unfurled. The sacredness of the Thongdrel is known by people far and wide. To view and receive blessings from the Thongdrel Chenmo is one of the most important aspects for the Parops and people of Bhutan as a whole. It is associated with getting rid of one's accumulated sins of body, speech and mind and an escape from being born in the lower 3 realms (animal, hungry ghosts and hell).

One of the biggest festivals in the country is the Thimphu Tshechu. This festival is held in the capital city for three days. The Tshechu is witnessed by thousands of people, both local and tourists. The actual Tshechu is preceded by days and nights of prayer and rituals to invoke the gods. Mask dances like the Guru Tshengye (Eight Manifestations of Guru Rinpoche), Shaw Shachi (Dance of the Stags) and many more are performed. 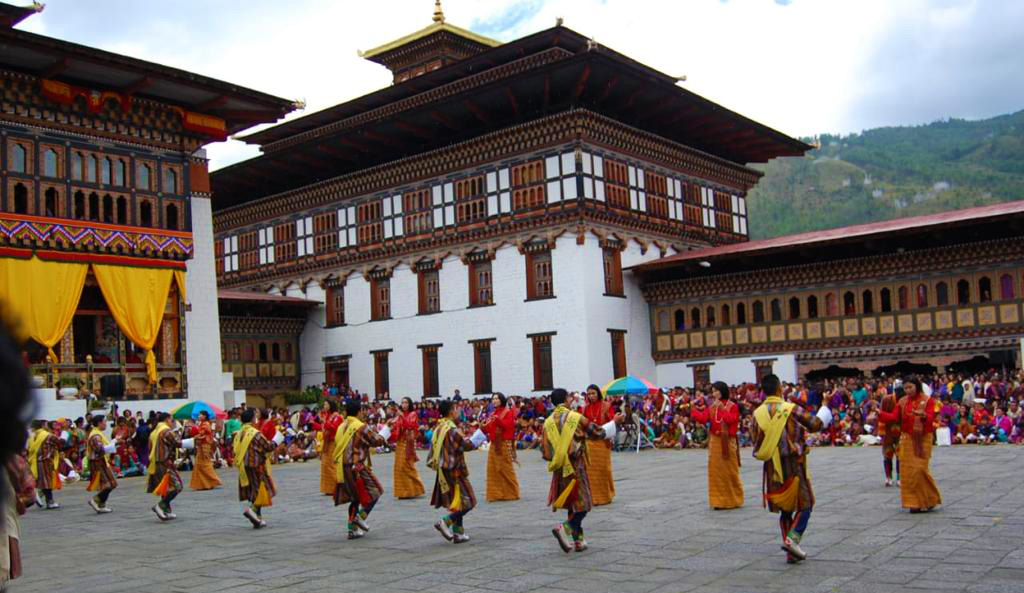 The 7th century Tibetan king Songsten Gampo is said to have built 108 temples in one day and Jambay Lhakhang in Bumthang is believed to be one of them. The Jambay Lhakhang Drup is one of the most interesting events in the entire country. During this festival, the chams (dances) include Terchham (Naked Dance), which was formerly initiated by Terton Dorje Lingpa, Mewang, Macham, Ging Tsholing, Dramtse Ngacham, Zhana Cham etc,. The dances are performed by the local villagers of Norgang, Changwa and Nangsiphel. The festival is a five-day programme.